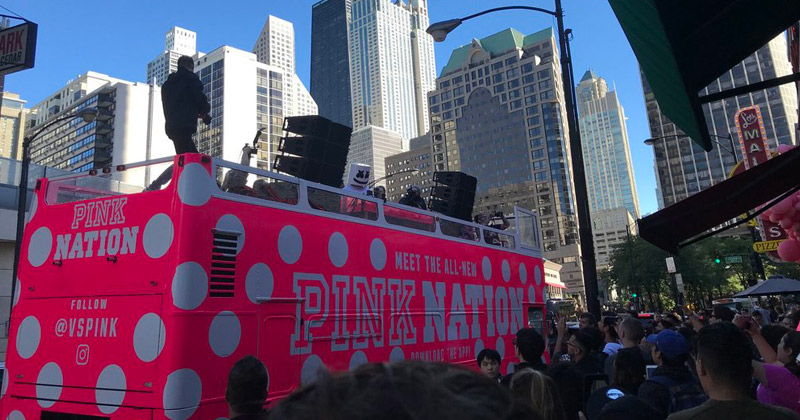 Over the years, Lime Media has managed hundreds of experiential programs for agencies and brands, and engaged with consumers thru many types of products and tactics: we’ve made high-quality fresh food at big events; we’ve let people get a hands-on test with a variety of new products (phones, vacuums, TV’s, etc.); they’ve played the latest video games in glass box trucks; and we’ve taken them on a VR journey to meet a murderous clown. These programs have had varying degrees of success, but there is one approach that always resonates with consumers:music. When we use music as the main “connection point” to consumers, we can be sure the program will deliver strong KPI’s for the client.

1.) Branding with a Pop-Up Concert – We put a popular DJ on top of a double decker bus in downtown Chicago for some pop-up concerts. At each stop, we had big crowds of our perfect target audience. This experiential marketing tactic is a home run every time.

2.) Promoting a New Album Release with a Glass Box Truck – We created a mini lounge in the back of a 24’ glass box truck. We toured multiple east coast markets, we made stops at clubs, colleges hangouts and other high traffic areas. Every stop was a major success, with people clamoring to be in and around the truck. It was a non-stop party, and even the Chairman of Sony Music praised the success of the program.

3.) Literally Rocking the Vote with Experiential Marketing Events – We worked with the non-profit organization Rock the Vote to help register people and encourage people to vote. During these months-long programs, we had music at almost every stop. While visiting colleges campuses, we would have regional DJ’s or popular local bands play. For the bigger events, we would be part of a major music event with A-list bands like the Foo Fighters, Jack Johnson or Steve Aoki.

There are many research and survey studies that show the power of music with consumers. One survey about music and wine, conducted in England by Dr. Adrian C. North and Dr. David J. Hargreaves, show that almost 8 out of 10 consumers buy French wine when French music is played in-store, and more than 7 out of 10 choose German wine when German music is played. When the consumers were asked about their product choices, the majority said that the music didn’t affect their purchase. But the facts clearly show that consumers are affected by music, even if it’s on a subconscious level.

Additionally, our non-scientific research (conducted via interviews with clients, staff and consumers) show that experiential programs that use music are more fun than other programs! And when consumers are having fun, it reflects positively on the brand.

As you head into your 2019 planning, think about how music can be incorporated in your next program. If you need some ideas, give us a call.