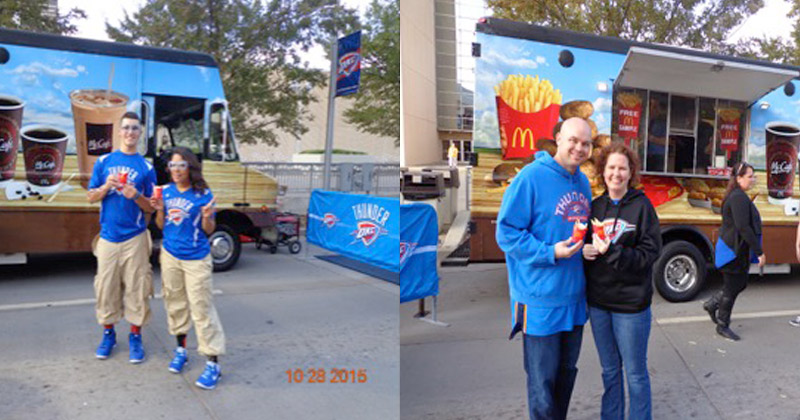 When Lime Media pulled up to Cheesapeake Energy Arena in the McDonald’s Fry Truck, you could feel the chill in the air. It was opening day for the Oklahoma City Thunder. They were set to face off against the San Antonio Spurs and it was predicted to be a close game. Fans came from all over Oklahoma and Texas to see the match and they were far from disappointed.

Was it because the Thunder took home the big W with the Spurs trailing by only 6 points, or was it because of the magic of McDonald’s French Fries greeting them as the made their way to the arena?

With the leadership of Moroch, the street team and Lime Media put on a great show! Everyone was ready for game day. As hundreds of basketball and French fry enthusiasts headed into the gates of the arena sporting their team colors, they were met with an outstanding McDonald’s event footprint. There was a basketball toss game, a bounce house, and even a live band to get things started, but the real piece de resistance was the McDonald’s Fry Truck, supplied by Lime Media.

We were passing out freshly made McDonald’s French Fries and having a great time doing it. Consumers were all smiles as they grabbed their free samples and tried the golden crispy goodness of McDonald’s French Fries. Many reminisced enjoying the freshly fried flavor as kids and spoke of wanting to share the experience with their own children.

By the time the basketball game started, we had passed out over 1,500 samples to the grateful consumers. For McDonalds and Lime media it was nothing but net!